University leaders have come together at a forum in London to discuss the economic impact of higher education in the United Kingdom, Australia and around the world.

The forum, “Lessons Learned: How higher education can drive the economy”, was co-hosted by Nous Group, RMIT University and the Australia-UK Chamber of Commerce at King’s College London on May 23. Topics for discussion included economic development, research models, digital disruption and migration.

Nous Principal and London office lead Simon Lancaster opened the forum with a discussion about the relationship between higher education, the economy and international research. He told the 80 guests in attendance that studies had shown strong university sectors were associated with stronger economies.

“Countries with higher levels of education attainment and higher levels of investment in higher education research and development are consistently shown to have higher per capita income,” he said, noting studies that put the contribution of UK universities to the domestic economy at £52.9 billion and the Australian equivalent at A$25 billion.

Professor Ed Byrne AC, the President and Principal of King’s College London, told the event that research partnerships between universities were most effective when they involved few rather than many universities.

“I have become convinced that mega partnerships do not work, and we are better off to have sustained, deep partnerships,” said Professor Byrne, who was previously Vice Chancellor at Monash University and has held senior research positions in universities in the UK and Australia.

Following discussion on models of international research partnerships, the conversation turned to digital disruption in higher education. Simon asked speakers how they thought universities were responding to major changes brought about by technology.

Professor John Dewar, the Vice Chancellor and President of La Trobe University, explained that the higher education sector needed to prepare for digital disruption, but that it would be incumbent players rather than new entrants that drove change.

“Universities are facing a future like the banks; they have to keep the branches open but also have to respond to customers’ changing expectations,” he said, forecasting that mass open online courses would continue to grow, despite not meeting previous expectations for expansion.

Panellist Paul Lovegrove, the CEO of Navitas division University Partnerships Europe, said a major change was that international students no longer pick a country they wish to study in, and then a university. He said universities are “now operating in a fully global market”.

Paul spoke about how the university partnerships model had emerged to help international students adjust to studying overseas. “We are witnessing the evolution and maturity of the educational pathway model. As trust develops, universities are seeing more strategic opportunities,” he said, noting that Navitas now manages the Singapore campus for Australia’s Murdoch University, and other universities are expanding distance learning options.

Dr Marta Fernandez, the Executive Director of RMIT Europe, said higher education providers needed to more deeply embed themselves in the communities in which they operate.

“Part of creating a global university is also playing a civic role in other countries; we want to create local opportunities,” she said, noting that RMIT was creating green infrastructure in a Vietnamese city as part of its effort to become the most networked university in Vietnam.

The civic role of universities was a key theme of the event. Simon Lancaster commented that these university and sector leaders see their role as not only to attract international students and research, but to give back to communities and economies around the world. He said many universities were making internal changes to tap into the opportunities presented by international students.

Concluding the event, Zac Ashkanasy noted that the discussion showed we are witnessing the next wave of maturity of the international education ecosystem. “Students now thinking globally, institutions becoming wiser and private enterprise more enabling than ever before,” he said.

Nous Group hosts invitation-only events in the UK, Australia and Canada to advance discussion and debate among leaders in their field.

Photos from the event are available on the Australia-UK Chamber of Commerce website. 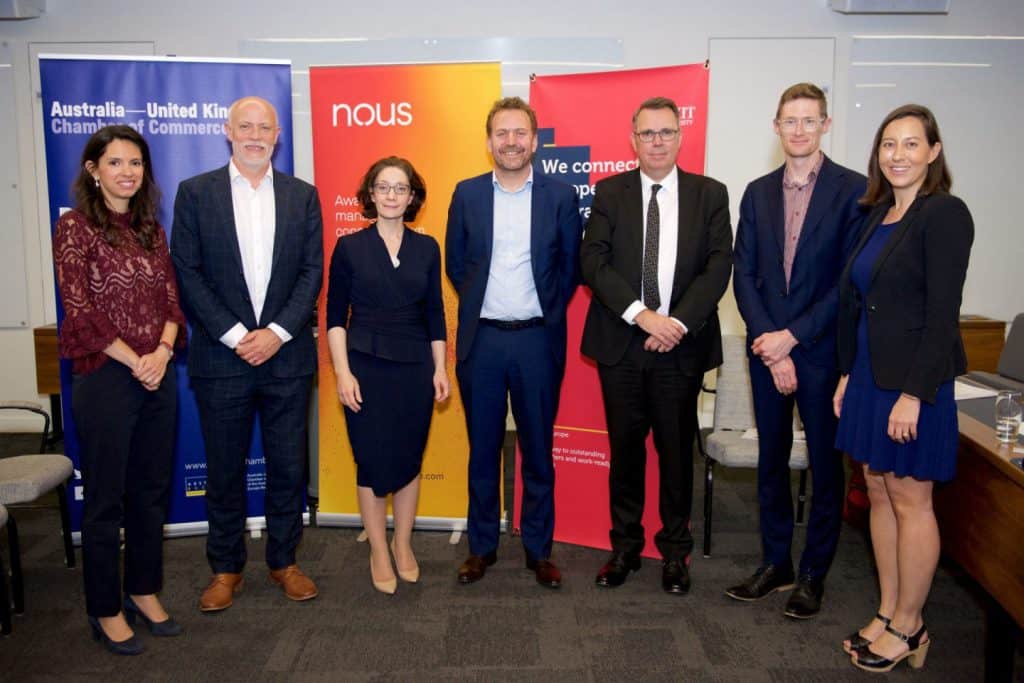 Panellists at the Lessons Learned event